"The sounds of the bazaar", now "The sound of Skopje"

It's a good feeling when two traditions meet in one, "The sounds of the bazaar", now "The sound of Skopje"

Promoting new concert locations and their revival in a cultural context
The music festival "Sounds of the bazaar", this time organized as the Sounds of Skopje in the organization of the Cultural Information Center (KIC), was held from September 16 to 17, musical performers from the country and the region took part in the festival.
The sound of Skopje' also means a new, summer, open air festival, which intends to grow into a new Skopje music hotspot. A space where both established and new groups who still seek the trust of the city can be seen on a big stage. Several established music stars from the city, the region and abroad took part in the festival. So the musical content throughout the bazaar was enriched with guest performances by the German band "Diaz Wojtas Duo" and "Viva Strings"), and in the galleries of KIC you could see the exhibition "Macedonia" (MACEDONIA) by Brazilian artists Daniel Castinet and Wilson Neto .
On  the"Mother Teresa" Square, many local bands performed, while on "Ibni Pajko" Square an exhibition of collages by Igor Kalc was held. creating a new reality", a poetry reading was organized as well as the play "Kuferko, the world traveler from Macedonia".
The festival connected several aspects, so visitors could secure entrance to the festival by leaving a can or plastic bottle.
The festival made it possible to promote new concert locations throughout the bazaar and the city, but also to promote new artistic names that are looking for their audience. 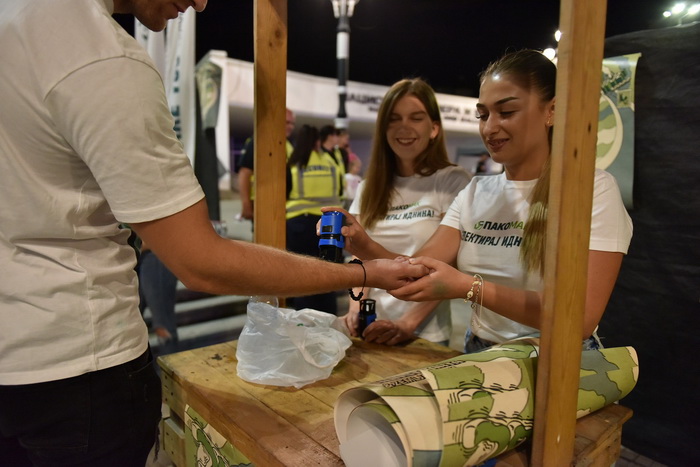